Paul Howard joined Memoria in 2019 after working for the London Ambulance Service as a Quality Assurance Manager. Previously he had served in both the British Army and Metropolitan Police Service.
Paul is the manager at North Hertfordshire Memorial Park handling all aspects of the daily running of the facility. 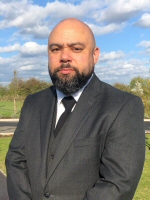 Kieran joined Memoria in 2018 after working for a local funeral director as a driver/bearer. He has also served as a Police Special in Bedfordshire and a security operative at Luton Airport.
Kieran is the Chapel Attendant at North Hertfordshire Memorial Park, he deals with the day to day funeral services, liaising with families and funeral directors. 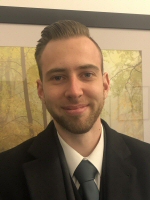 Donna Rogers joined Memoria in 2019 having worked as a Credit Controller for most of her career.
Donna is the Administrator at North Hertfordshire Memorial Park looking after the office protocols and often front of house at the facility.

He previously spent 15 years at Enfield Council working in schools, libraries and other civic centres.

Rick is Head of Grounds at North Hertfordshire Memorial Park, over-seeing all aspects of the grounds from burials and interments to general maintenance and care of the plants within the park. 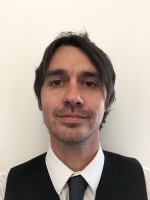 A fourth generation funeral director, Howard trained with James Summers of Cardiff in 1968. He took over the family business in 1975 and launched an expansion programme that culminated in the flotation of Hodgson Holdings plc in 1986. Through subsequent mergers the company formed the largest funeral/crematorium group in the UK. Howard sold his interests in 1991, having taken the company from one branch to 546 and became 'Entrepreneur of the Year 1987' in the process. He is largely recognised as the individual who transformed the funeral industry in the 1970s, 80s and early 90s.

After a second career in the gift industry as chief executive of Ronson plc and Colibri International he returned to the funeral industry as founder and CEO of Memoria, and has developed it into the third largest and fastest growing crematoria company in the UK today. In 2016 he founded Memoria Low Cost Funeral, the direct cremation arm of Memoria and has taken that company from a standing start to the largest direct cremation company in the UK. He is the author of four books, including a biography of HRH The Prince of Wales.

A former career banker who has held senior positions with both the ANZ/Grindlays and Abbey National banking groups, including in venture capital, where he was responsible for the flotation of Hodgson Holdings plc, and in debt recovery, which resulted in him directly managing a succession of troubled commercial and financial businesses as principal for the bank, both in the UK and Europe, 1992-2000.

Jamieson Hodgson joined Memoria in early 2009. He initially led business development but has since progressed into the role of Head of Planning. During that time, he has helped to grow the business by leading our planning team to securing 10 new planning consents for new crematoria and memorial parks in the last 7 years. Jamieson has overseen 6 planning appeals during this time – leading to 5 consents. This has allowed him to develop knowledge in planning law and policy. He is a demographic expert who has helped to develop GIS technology in order to better understand the way that 'need' and financial viability is measured in crematoria development.

He spent the previous 3 years working for Accenture where he led business development for their UK Capital Markets strategy group. This role saw him work on a number of projects for UBS, HSBC, RBS and Citi Group. Prior to joining Accenture, Jamieson completed an honours degree in International Business and Finance and also worked for the VW Group and PwC during this time.

Paul is the Managing Director of Memoria Affordable Funerals and Memoria Low Cost Funeral Ltd, the funeral arm of Memoria Ltd. Memoria Low Cost Funeral Ltd are the largest direct cremation company in the country. Memoria Affordable Funerals are a nationwide provider of outstanding quality, attended funeral services. Paul joined Memoria in late 2013 after a career working in both the public and private sector, a specialist in facilities management and sales and marketing, he has held multiple roles within Memoria before his current position.

Prior to joining Memoria, he graduated from Teesside University after studying Business Management and has enjoyed a successful career in both telecommunications and the utility sales industries where he founded and managed his own direct sales business employing 70 members of staff.

Carl Clamp is our Director of Operations. He was previously manager of our Amber Valley Memorial Park and Crematorium. He now oversees operational performance in terms of service standards across the Memoria Group. In particular, he is responsible for practical training for cremation, administration and general crematorium management across all staff members in the Memoria Group. He is also the CEO's assistant in all operational matters.

Richard Todd is our Sales & Marketing Director. Richard has over 35 years' experience in the Funeral sector having held a number of senior operational & sales roles across market leading independent, Co-operative and private equity supported Funeral & pre-need businesses. Richard is responsible for Memoria's local community and funeral director relations across all sites in England and Wales.

Frank Meilack is our Director of Community Engagement. From 1995 Frank worked in the Outdoor Media industry as part of the Clear Channel / Transport for London partnership transforming the Outdoor Media options across the capital and the UK, with involvement in procurement, development, sales and operational delivery as Regional General Manager.

In 2015 Frank came into the funeral Industry at Kemnal Park in South-East London, a 55-acre site with outline approval for a cemetery. Over a 4 year period, Frank transformed the performance of the park with cremation services rising from circa 150 to over 900 per annum. Burial numbers and prestige burial options also rose dramatically with the introduction and marketing of products for specific community groups such as Muslim, Turkish, Catholic and Italian communities.

Jacqueline Peirson is our HR Manager, she has many years' experience of dealing with HR matters from the day to day generalist function to being involved with planning for the future. Jacqui reports into Memoria's HR and Operational Performance Director and is responsible for keeping policies and procedures up to date. She is also responsible for the recruitment process at all Memoria sites.

Wendy Smith is our Low-Cost Funeral Ltd Office Manager. Wendy joined us in 2016 and is a highly-experienced customer service manager. She has played a pivotal role in the development of Low Cost Funeral Ltd.

Wendy is the first line interacting with potential clients on both At Need and Pre-paid Funeral Plans to ensure that every detail and wish is catered for as specified by clients.

Julie Huggins joined Memoria in September 2019. After starting her career in Audit, Julie then moved to a variety of Industry roles in small businesses up to global brands, Julie joins Memoria as Finance Manager for Sites.

She oversees the smooth and efficient running of the Finance function for Memoria Group sites, whilst providing support to the Management team.

In February 2020 she was promoted to Group Finance Manager, with responsibility for the financial functions of the crematoria, the operations of Low Cost Funeral Limited, and of the Memoria Group.

Haydn Griffiths is our finance manager for the sites. Haydn joined Memoria in March 2020, he has held various finance roles in industry, more recently in aviation. He oversees the day to day running of the finance function for Memoria group sites.

Mark is our Assistant National Operations Manager providing support to our Director of Operations. In addition to this, he also provides operational support to Memoria sites throughout the country in his secondary role as National Relief Operative. Mark has over 30 years' experience in global logistics culminating in founding and running his own business before changing career direction after selling the company to focus on the funeral sector. Prior to joining Memoria Ltd, Mark has gained experience in funeral directing and arranging as well as managing the logistics and operations for one of the midlands largest funeral providers.

Michael has over 25 years' experience in logistics management, the highlight being an operations manager for the UK's largest health & beauty retailer. This was followed by 5 years working in education and training helping the unemployed find work and gain life skills. Since then he has gained experience in the funeral sector managing logistics for one of the UK's largest funeral providers before joining Memoria. 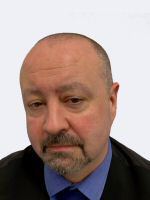